Cain Is Not Able 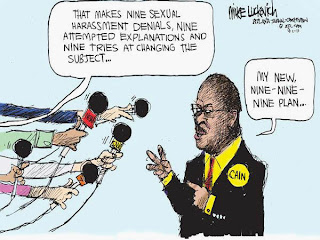 As usual, we ask that you click on the song link here before reading this blog post so that you may enjoy some very appropriate background music which we now refer to as “Herman’s Theme”.

Part-time Republican Presidential candidate and full-time “player” Herman Cain was forced to hold a press conference last night to address the five (and counting) separate allegations of sexual misconduct which have emerged during the last two weeks. Before a throng of inquisitive media members, he said of all the allegations, “They simply didn’t happen. They simply did not happen.”

Cain’s denials came on the very same day that a fifth woman, Donna Donella emerged with the charge that in 2002, Cain tried to get her to arrange a dinner with a “lovely young lady” in the audience at a speech that he was giving. Additionally, just prior to Cain’s press conference, one of his original accusers revealed her identity. Karen Kraushaar was one of the women who received a settlement payment as the result of her sexual harassment charges and she told CNN that Cain is a “serial denier”. She also said that she would like to hold a joint press conference with all of the other alleged Cain victims so that the public could better understand his misbehavior. READ MORE
Posted by Obwon at 6:52 AM