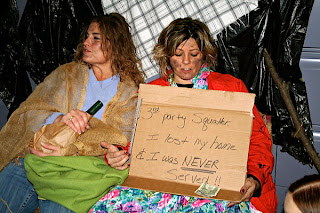 Last year, the law firm of Steven J. Baum threw a Halloween party in which employees mocked the homeowners it foreclosed against, wearing horrific "squatter" and "homeless" costumes and setting up a fake foreclosure sale tent city. Steven J. Baum is the largest foreclosure mill firm in the state of New York, and represents Citigroup, JPMorgan Chase, Bank of America, and Wells Fargo, among other mortgage lenders. A former employee sent photos of the partyto the New York Times' Joe Nocera:

These pictures are hardly the first piece of evidence that the Baum firm treats homeowners shabbily — or that it uses dubious legal practices to do so. It is under investigation by the New York attorney general,Eric Schneiderman. It recently agreed to pay $2 million to resolve an investigation by the Department of Justice into whether the firm had “filed misleading pleadings, affidavits, and mortgage assignments in the state and federal courts in New York. (In the press release announcing the settlement, Baum acknowledged only that “it occasionally made inadvertent errors.”)

MFY Legal Services, which defends homeowners, and Harwood Feffer, a large class-action firm,have filed a class-action suit claiming that Steven J. Baum has consistently failed to file certain papers that are necessary to allow for a state-mandated settlement conference that can lead to a modification. Judge Arthur Schack of the State Supreme Court in Brooklyn once described Baum’s foreclosure filings as “operating in a parallel mortgage universe, unrelated to the real universe.” (My source told me that one Baum employee dressed up as Judge Schack at a previous Halloween party.)
READ MORE