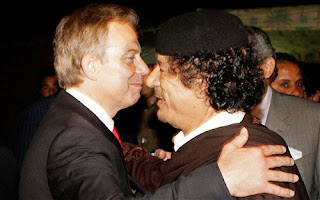 Mr Blair was flown to Libya twice at Gaddafi's expense on one of the former dictator's private jets Photo: GETTY

Tony Blair used visits to Libya after he left office to lobby for business for the American investment bank JP Morgan. New questions over Tony Blair's ties to Col Muammar Gaddafi and his role in the release of the Lockerbie bomber have emerged from documents discovered in Tripoli. A senior executive with the Libyan Investment Authority, the $70 billion fund used to invest the country's oil money abroad, said Mr Blair was one of three prominent western businessmen who regularly dealt with Saif al-Islam Gaddafi, son of the former leader. Saif al-Islam and his close aides oversaw the activities of the fund, and often directed its officials on where they should make its investments, he said. The executive, speaking on condition of anonymity, said officials were told the "ideas" they were ordered to pursue came from Mr Blair as well as one other British businessman and a former American diplomat. "Tony Blair's visits were purely lobby visits for banking deals with JP Morgan," he said. Documents found by The Sunday Telegraph published this weekend showed Mr Blair had made at least three visits to Tripoli, twice in the lead-up to the release of the alleged Lockerbie bomber Abdelbaset Ali Megrahi in 2008 and 2009 and once last year. On the first two occasions he was flown to the country on planes arranged by Col Gaddafi.

Note: For a two-page summary of US Marine Corps General Smedley Butler's explanation of the profiteering behind modern wars, click here.

For key reports on corporate and government corruption from major media sources, click here and here.
Posted by Obwon at 9:12 AM