Tony Blair is godfather to Murdoch's daughter? Now it all makes sense

The true bond between Blair and Rupert Murdoch is revealed, and with it the extent of the media baron's proximity to power 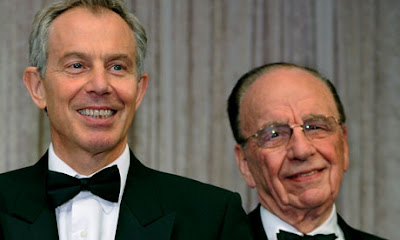 So much falls into place with the revelation that Tony Blair became godfather to one of Rupert Murdoch's two young daughtersand attended their baptism on the banks of the river Jordan last year. True, it isn't yet clear whether Blair had agreed to become a godparent while he was prime minister [see footnote], and the ceremony did take place after he had left office, but the important point is that the relationship underlines Murdoch's deep entrenchment in British political life.

Murdoch's third wife, Wendi Deng, who let slip the information in an interview with Vogue, described Blair as one of Rupert's closest friends. Blair's account of the relationship in his memoirs is somewhat different, portraying Murdoch as the big bad beast, who won his grudging respect. That is clearly disingenuous. As other memoirs and diaries from the Blair period are published, we see how close Murdoch was to the prime minister and the centre of power when really important decisions, such as the Iraq invasion, were being made.
READ MORE
Posted by Obwon at 1:06 AM