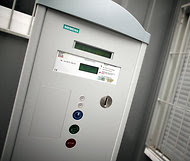 Oliver Berg/DPA, via Agence France-Presse — Getty Images
A ticket machine prints receipts for those who work the streets.

The city of Bonn has begun collecting taxes from prostitutes with an automated pay station similar to a parking meter, proving again that German efficiency knows few if any bounds. Bonn is not the only city in Germany to charge such a tax, but it is the first to hit upon the idea of a ticket machine that prints out receipts for the nightly flat fee of 6 euros (currently about $8.65) for the privilege of streetwalking. The meter went into service over the weekend, and by Monday morning had collected $382 for the city’s coffers. Prostitution is legal in Germany; the Reeperbahn in Hamburg is one of the largest red-light districts in Europe. Attempts are often made to regulate the industry, unionize the workers and tax the proceeds, but they are not always effective, given both the discretion and the unpredictability that are inherent in the business. Street prostitution as practiced in Bonn, once the capital of West Germany and a town better known for sleepiness than sexiness, would be unfamiliar to many people outside Germany for its unusual degree of organization and institutionalization. The Siemens-built meter machine ... cost $11,575 including installation.

Note: Prostitution is legal and regulated in Germany and seven other European countries.READ MORE
Posted by Obwon at 9:26 AM