Getting Those Republican Attacks Right 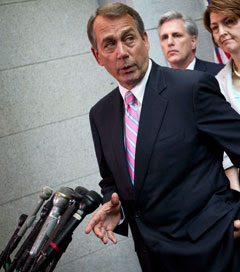 House Speaker John Boehner (R-Ohio) speaks to the press about the budget on Capitol Hill in Washington, April 15, 2011. While Republicans claim that higher taxes and regulation would kill jobs, the evidence does not support this assertion. (Photo: Philip Scott Andrews / The New York Times)

Dean Baker, Truthout: "At this point, Republican politicians are beginning to sound almost like wind-up toys when they complain about job-killing taxes and regulations that keep businesses from hiring. The media should at least do the Republicans and the public the courtesy of attempting to discern if these complaints make any sense. (McClatchy gets high marks for this effort.) If the charges are true, then there are logical implications that can be explored. The media should be taking the time to see whether the evidence is consistent with Republican claims. The tax side of the story is pretty simple. The Republicans are making things up."
Read the Article
Posted by Obwon at 9:57 PM