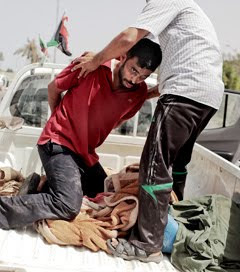 
Rod Nordland, The New York Times News Service: "Documents found at the abandoned office of Libya’s former spymaster appear to provide new details of the close relations the Central Intelligence Agency shared with the Libyan intelligence service - most notably suggesting that the Americans sent terrorism suspects at least eight times for questioning in Libya despite that country’s reputation for torture."
Read the Article