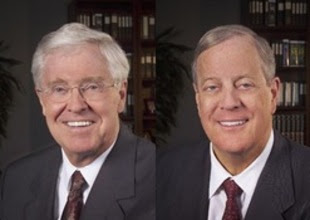 In a speech recorded at the secretive Koch gathering, Charles Koch thanks donors who gave more than $1 million to the cause. Here's who they are.
September 6, 2011
of the Koch brothers' Vail seminar, and listen to the exclusive audio.

Twice a year, the billionaire industrialist brothers Charles and David Koch host secretive retreats for an exclusive list of corporate America's rich and powerful to strategize and raise money for their right-wing political agenda. Mother Jones has obtained exclusive audio recordings
Read Mother Jones' inside accountthat shed some light on the brothers' latest retreat, held at a resort near Vail, Colorado, in late June.

In a speech that is part of these recordings, Charles Koch thanks donors who gave more than $1 million to the cause. We checked the audio against a list of participants at the Kochs' 2010 seminar in Aspen that was obtained by ThinkProgress.organd did additional research on these individuals. Below are the names Koch read that appeared on the previous guest list.
READ MORE
Posted by Obwon at 6:20 PM