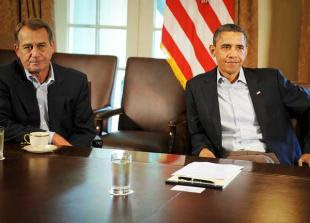 The U.S. government is not a household that must live within its means.
By David Moberg

Boehner started by asserting that “the spending binge going on in Washington is a big part of the reason why” millions are unemployed. In fact, a giant housing bubble burst, its effects were multiplied by a deregulated (and fraudulent) financial sector, and a deep recession followed. Several studies demonstrate that government spending—whether increases in programs like unemployment compensation or the stimulus package and the bailouts of the banking and auto industries—saved or created jobs. For example, two Dartmouth economists found more job growth in states that received more stimulus money.

There has been no spending binge: READ MORE
Posted by Obwon at 1:34 PM