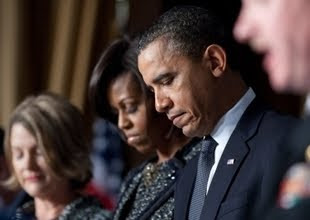 Taxpayer dollars are continuing to be dispensed to religious groups via a secretive and controversial government office.

This article originally appeared in Conscience magazine, published by Catholics for Choice.

After President Barack Obama gave a congratulatory shout-out to Joshua DuBois, director of his Office of Faith-Based and Neighborhood Partnerships (OFBNP), at the National Prayer Breakfast in February, Georgetown University religion scholar Jacques Berlinerblau wondered in the pages of the Washington Post "what exactly that office is doing -- a never-ending source of confusion, and even awe, among reporters, policy analysts and professors in Washington, DC."

Berlinerblau compared the OFBNP to the Kremlin -- apparently because of its ironclad hold on information about its activities, which are frequently reduced to cheery blog posts on the White House website extolling the virtues of faith-based provision of social services to people in need, but rarely addressing the thornier controversies that plague its mission.

Beneath its do-gooder exterior, the White House has taken few steps that have allayed the concerns of both advocates of church-state separation concerned about the OFBNP's constitutionality and advocates of transparency and accountability. Meanwhile, as taxpayer dollars continue to be dispensed to faith-based organizations, it is still unclear how an executive order Obama signed in November 2010, which set out new requirements intended to reduce some constitutional concerns, will actually be implemented.

Obama first launched the OFBNP in February 2009, shortly after taking office. At the time, he mostly kept policies from the Bush administration in place, including maintaining the arrangement of having a faith-based office in the White House, as well as offices in twelve federal agencies. Religious contractors and grantees would continue to receive federal funding under the "level playing field," a Bush-era term meaning that faith-based organizations would not be at a disadvantage relative to secular organizations in applying for federal funds. In one major change, Obama created an advisory council, to be made up of religious and community service leaders, to develop recommendations on how to improve the functioning of the office and increase partnerships between the government and faith-based groups in addressing societal problems.
READ MORE
Posted by Obwon at 10:10 PM

Email ThisBlogThis!Share to TwitterShare to FacebookShare to Pinterest
Labels: government, office of fath based, religion