How Paul Stephenson and PM fell out over hacking scandal 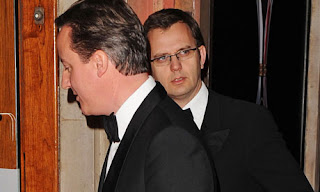 David Cameron flew abroad last night for a long-arranged trip to Africa leaving behind the carnage inside Britain's most important police force, tumult inside the news organisation with which he has closest links, and open disdain from his deputy prime minister, Nick Clegg, over his appointment of Andy Coulson to No 10.

The in-flight entertainment will have to be very good to calm his mood.

Aides in Downing Street contacted the prime minister's Virgin plane en route from Heathrow to South Africa just shortly before Sir Paul Stephenson announced he was stepping down as the UK's most senior police officer.
READ MORE
Posted by Obwon at 11:32 AM