What does it take to get the attention of the media when a corrosive scandal erupts that they don’t seem to want to cover?

This past week a prominent and powerful public figure was implicated in a searing and salacious controversy.

It involves sex, felonious criminal conduct, corporate intrigue, political shenanigans, and personal betrayal. This is either the scoop of the year or the best damn plot of “Days of our Lives” in decades. 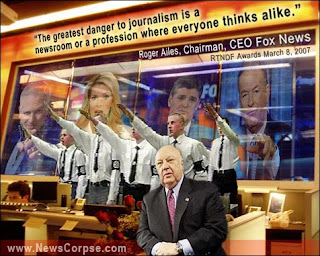 The central figure in the controversy happens to be one of the most powerful media executives in the world, Fox News CEO Roger Ailes. It is alleged that Ailes tried to coerce a News Corp colleague, Judith Regan, to lie to federal investigators about her affair with Bernard Kerik, President Bush’s nominee to head the Department of Homeland Security. Ailes wanted to shield his friend Rudy Giuliani, who had sponsored Kerik, from an embarrassing episode as he was attempting to launch a campaign for president. Kerik presently resides in federal prison on tax fraud violations.

Can you just imagine what would have happened if the head of CNN or CBS had been the subject of such assertions? First of all, Fox News would have made it their lead story at the top of every hour. It would have been repeated ad nauseum with remotes from the network’s offices. Their primetime pundits would have spun it into a conspiracy that enveloped President Obama, George Soros, Muslim radicals, and protesters from Egypt to Wisconsin.
READ MORE
Posted by Obwon at 8:26 PM