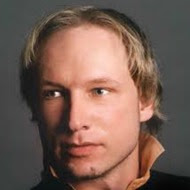 You would think that a man so dedicated to his cause that he's willing to kill dozens of innocent people would at least take the time to write an original rambling, long-winded manifesto. But Anders Breivik, the Norweigan who has confessed to killing at least 93 people on Friday — and arrived in court today for a hearing that is closed to the press and public — appears to have stolen a noticeable chunk of his 1,500-page manifesto, "A European Declaration of Independence," almost verbatim from the Unabomber, Ted Kaczynski.
READ MORE
Posted by Obwon at 10:08 AM