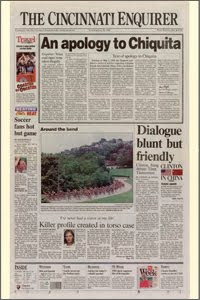 On June 28, 1998, under a bold headline, “An apology to Chiquita,” The Cincinnati Enquirer made a shocking admission.

The series of investigative articles it had published a month earlier on the business practices at Chiquita Brands International were “based on illegally obtained voice mail messages” by an Enquirer reporter. To get information for the explosive stories, Chiquita’s phones had been hacked.

The growing phone-hacking scandal that threatens media mogul Rupert Murdoch’s international empire is a reminder that getting a news scoop by unscrupulous means, though rare, is nothing new and is not limited to sensational tabloids.

The Enquirer’s troubles began May 3, 1998. After a year of intensive reporting, the newspaper published an 18-page series of 22 stories accusing Chiquita of bribery and other illegal activities in the Latin American countries where it produced bananas. The allegations were supported by access codes and phone tapes that the lead reporter initially claimed he received from a source at Chiquita.
READ MORE
Posted by Obwon at 8:09 AM